Celebrating the start of the watercress season

T'S an ancient crop and today it's recognised as a bona fide superfood containing more than 50 essential vitamins and minerals. 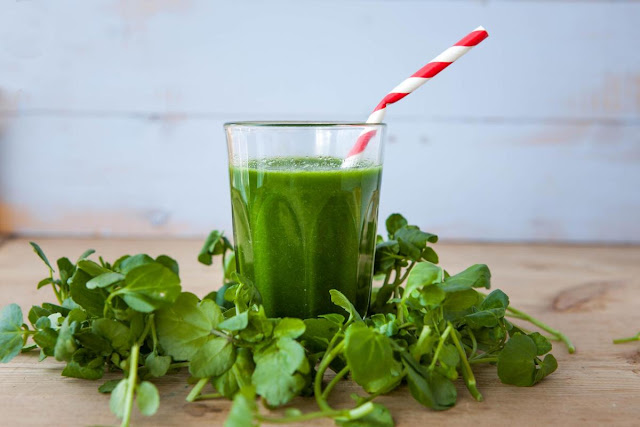 And what's more, it's grown in abundance on our doorstep.
Such is the popularity of watercress – which is just coming into season – local growers The Watercress Company based at Waddock Cross near Dorchester is developing 10 acres of new farms.
This positive news comes during National Watercress Week, which kicked off last week with the Alresford Watercress Festival in the Hampshire town to celebrate the start of the season.
Watercress is not just for salads and sandwiches – such is the versatility of this peppery superfood it can be used to make a cracking smoothie (see below), is being added to gin and beer, can be used in pesto instead of basil and can brighten up mash, stir-fries and soups.
Not only is it tasty, it's amazingly healthy too – gram for gram watercress contains more calcium than milk, more folate than bananas, more vitamin c than oranges and more vitamin e than broccoli. Significant research throughout the globe has linked watercress and the prevention of cancer and this chairman of the chopping board has significant beauty credentials reversing signs of aging in skin.
One hundred years ago around 1,000 acres of watercress beds existed around the country; today, only 150 acres remain, concentrated in Dorset and Hampshire. Many of these beds are owned by Dorset based growers, The Watercress Company. In recent years, watercress has experienced something of a revival as its enviable health credentials and distinct flavour have been recognised and slowly demand has increased. In response to this, The Watercress Company which has seen sales increase by 10% over the last 12 months, is developing 10 acres of new farms to reverse the decline in UK beds and create many jobs for the rural sector.
Tom Amery, MD for The Watercress Company said: “Watercress was at its peak in the Victorian era when it was often referred to as ‘poor man’s bread’, but over time it became less popular and sales were in decline. However, in the last decade or so we have seen a renaissance for the crop as money has been invested in peer-reviewed research that has demonstrated clear links to the prevention of cancer with PEITC, the plant compound in watercress that gives its distinctive peppery taste. Chefs have also rediscovered its versatility and the flavour it can bring to dishes. More recently in the ‘Great British salad shortages’ of a few months ago, watercress has proved what a tough little leaf it is, withstanding and even enjoying the cold and flooding that Spain experienced and which caused the well-reported shortage of other salad leaves."
He added: “We have always had faith in watercress, this ancient, very British crop and now feel it’s time to invest in new, state of the art beds in the UK to help cope with demand.”
Bags of fresh watercress are available from national retailers; Waitrose, Tesco, M&S, Co-op and Asda. For independent stockists check thewatercresscompany.com
Watercress Warrior Beer is a new partnership between The Watercress Company and Cerne Abbas Brewery, Only a limited number of bottles have been made. For outlets see cerneabbasbrewrey.co.uk
For hundreds of delicious recipes to include more of this superfood in your diet, visit watercress.co.uk
Do you use watercress?Leave your comment below.