Chocolate Gives Statins A $29 Billion Run For Their Money 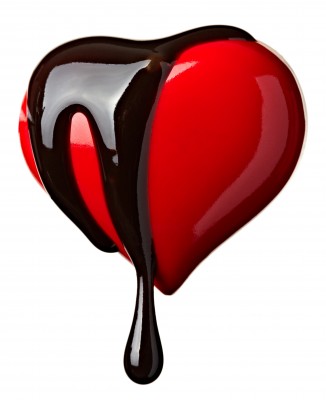 With the blockbuster cholesterol-lowering class of drugs known as statins being widely promoted for the primary prevention of cardiovascular disease, despite their having over 300 documented adverse health effects (including heart failure!), how does chocolate sound as a viable, heart-friendly alternative?

We already connect amorously with chocolate (to the tune of 6 billion lbs of cocoa consumed annually worldwide), revealing in heart-felt expressions like "I love it," and "this is to die for!" how comfortable we are with publicly declaring our affection. But did you know that while it makes our emotional hearts sing, it may actually keep our physical hearts happy, alive and ticking longer, as well?

Indeed, back in 2006, researchers found that for elderly men, eating cocoa intake was inversely associated with blood pressure and 15-year cardiovascular and all-cause mortality. When compared with the lowest tertile (lowest 33%) of cocoa intake, the adjusted relative risk for men in the highest tertile was .50 for cardiovascular mortality, or a 50% reduction, and .53 for all-cause mortality, or a 47% reduction. Not bad considering the median cocoa intake among users was 2.11 grams per day, or just one half an ounce a week. While many people are searching out supplements such as ubiquinol to combat the side effects of statin drugs, they could have been eating chocolate instead.


Anything that can reduce your risk of dying from all causes by 50%, which is not an expensive and potentially dangerous drug, but a food, should be be taken seriously, even if -- paradoxically -- it is usually found in the candy section of the grocery store.

There is no shortage of solid, human clinical research supporting the consumption of cocoa, the signature ingredient in chocolate, for the reduction of both cardiovascular disease risk factors, and "hard" cardiovascular outcomes, e.g. hypertension, endothelial dysfunction, insulin resistance, low HDL, stroke, heart disease, etc. GreenMedInfo.com has made 30 such studies available to view on its cocoa page.

The remarkable thing about the research on chocolate is that its consumption appears to improve the pathological condition of the blood vessels known as endothelial dysfunction, and which is believed to be at the root of the problem of plaque accumulation in the arteries, as well as elevated blood lipids. Statins may in fact exert their greatly exaggerated health benefits not by suppressing lipids (as popularly advertised), but by acting as a mild vasodilator through enhancing nitric oxide concentrations in the lining of the blood vessels (endothelium). Statins, however, are produced from chemicals, and therefore guarantee a certain degree of collateral poisoning will take place, whereas chocolate has a long history of safe use both as a food and a medicine. Chocolate has also been extensively researched for effectively lowering blood pressure in those who consume it, which is still considered one of the best ways to reduce cardiovascular disease risk, and which drug-based blood pressure medications are notoriously ineffective at, since they may actually raise cardiac mortality even while effectively lowering blood pressure. In a similar way, statins may effectively suppress blood lipids while at the same time weakening the heart muscle.

Some of cocoa/chocolate's other potential health benefits include:

Inhibiting Accelerated Aging - Not only has the preference for chocolate in older age been linked with better health, optimism and better psychological well-being, but it has also been shown in the fruit fly-based experimental model of aging to have antioxidative, pro-oxidative, and metal-chelating effects associated with increased lifespan. Moreover, research in women shows that long-term ingestion of favanol-rich chocolate (raw chocolate is especially rich in these compounds) protects against UV-induced skin redness and improves their skin condition.

Reducing Stress (Elevated Catecholamines) - Daily consumption of 40 grams of chocolate during a 2 week period reduces the urinary excretion of cortisol and catecholamines, while reducing other metabolic indicators of stress, including gut microbial metabolism.

Inhibiting Cholesterol Oxidation - Rather than fixating on the absolute number of lipoproteins or cholesterol within the blood (quantitiative analysis) it makes sense to ensure that those lipids don't undergo excessive oxidize (qualitative analysis) which is associated with injury to the blood vessels and the formation of atherosclerotic plaque. More than a few studies have found that chocolate prevents LDL cholesterol oxidation, while also boosting the beneficial HDL cholesterol

Boosting Cognitive Performance - Chocolate, along with flavonoid-rich red wine and tea, were shown to boost cognitive performance in elderly men and women, with the maximum effect at intacts of 10g/d, or the equivalent of 2 ½ ounces a week.

Improving Diabetes - New research from the American Journal of Clinical Nutrition has revealed that the consumption of chocolate, or its active constituents (cocoa, flavan-3-ols), reduces a broad range of risk factors for cardiovascular disease including insulin resistance. The researchers looked at 42 acute and long-term studies and found a 33% median reduction in insulin resistance following chocolate consumption. What is so unique about this new study is that chocolate consumption is generally believed to elevate blood sugar and blood insulin levels; not only does it disprove this myth but it sheds additional light on why chocolate consumption (especially dark, organic) may be beneficial in both type 1 diabetes and type 2 diabetes.

Boosting Sexual Function - Chocolate is an excellent vasodilator, which is one reason why it has been traditionally linked to improved fertility and virility. Research also indicates that chocolate consumption is linked to higher sexual function in women, as well.

This is only a sampling from the research we have gathered on chocolate/cocoa's potential health benefits, of which there are several dozen.

Lastly, any serious discussion on the medicinal properties of chocolate should be qualified by pointing out that chocolate is often unfairly traded, and has even been linked to child enslavement. Non-organic cocoa may also contain residues of the dangerous herbicide glyphosate (the active ingredient in Roundup), among many other biocides used in conventional farming, so the consumer must take special care to avoid these moral and physiological pitfalls. Also, because chocolate has complex pharmacologically active properties, it must be consumed in moderation, and with attention paid towards the tendency for using it to self-medicate, especially when the cocoa content is lower and the sugar content higher.
http://www.greenmedinfo.com/blog/chocolate-gives-statins-29-billion-run-their-money