Pepsi And Coca-Cola Used As Pesticide In India! 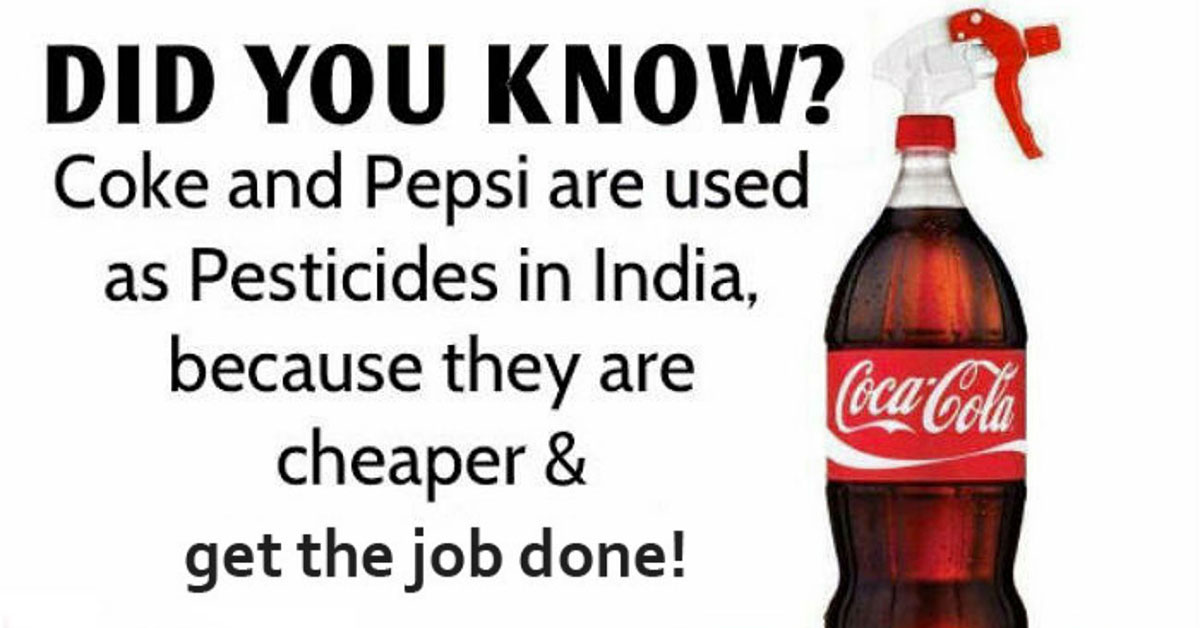 Alok Prasad Putul writes that “Farmers in India have been using Pepsi and Coca–Cola as a cheaper alternative to pesticides.”  Therefore, besides being a poison to the human body, these drinks are also used in other ways around the world.
The Center for Science and Environment (CSE) , which is one of India’s leading voluntary agencies, claims that the soft drinks produced in India,  including those with the brand names Pepsi and Coca-Cola, contain extremely high levels of pesticide residues, and due to this, farmers use them to fight pests as they are cheaper than the conventional pesticides.
In the third countries, it is cheaper to buy Coke than to find clean water. This drink has been tested due to its cleaning effects, and it has been found to be quite effective in cleaning oil stains, tile grout and even strip paint off the cabinets.
In 2003, the CSE analyzed samples from 12 major soft drink manufacturers and discovered that all of them had residues of 4 extremely toxic pesticides and insecticides, lindane, DDT, malathion and chlorpyrifos.

Sunita Narain, the director of the CSE, reported the following at a press conference:
“In all the samples tested, the levels of pesticide residue far exceeded the maximum permissible total pesticide limit of 0.0005 mg per liter in water used as food, set down by the European Economic Commission (EEC).”
CDS scientists have reported that regarding the EEC limits, the chlorpyrifos level was 42 times higher, the residues of malathion were 87 times higher, and the levels of lindane-, which is banned in the United States-were21 times higher. Moreover, the stated that the toxins were able to lead to long-term cancer, birth defects, damage to the nervous and reproductive systems, and severe disruption of the immune system.

The CSE findings have shown that the Coca-Cola and Pepsi samples had almost similar concentrations of pesticide residues: namely, the contaminants in Pepsi samples were 37 times higher than the EEC norms, Coca-Cola exceeded the norms by 45 times.
These findings were soon negated by the chiefs of the Indian subsidiaries of Coca-Cola and Pepsi.
Sanjeev Gupta, president of Coca-Cola India, maintained that these revelations by CSE were “unfair” and his company was being subjected to a “trial by media”.

The companies disagree that their products are used instead of pesticides, as they do not contain anything which might control pests.
However, farmers in the Durg, Rajnandgaon and Dhamtari districts of Chhattisgarh claim that they used Pepsi and Coke to fight pests on their rice plantations.
This usage of the drinks significantly increased their sales in remote villages. One liter of the three most popular pesticides in India, Avant, Tracer and Nuvocron costs around 10,000 rupees (£120). On the other hand, one-and-a-half liters of locally made Coca-Cola cost only 30 rupees.
Therefore, if a farmer mixes a bottle of Pepsi or Coke with water and sprays it on the crop, it would cost 55-60 rupees less per acre. Yet, the effects of this technique are still not proven!

According to the agricultural specialist, Devendra Sharma, farmers are mistaken in believing that these drinks and pesticides are the same, as these drinks are sugar syrups and which attract red ants when poured on crops, which in turn feed on the larva of insects.
Also, allegedly, not only these drinks were used for this purpose. Other cola soft drinks and locally produced beverages worked as well, and farmers claim that Pepsi, Thumbs Up, and other local soft drinks are also effective.
The main ingredients all colas have in common are water and sugar, but some manufacturers also add citric and phosphoric acids.
Mr. Sharma claims that the practice of using sugar syrup on pests is old:
“Jaggery made from sugar cane has been used commonly for pest control on many occasions. Pepsi and Coca-Cola are being used to achieve the same result. Farmers have traditionally used sugary solutions to attract red ants to feed on insect larvae. I think the colas are also performing the same role.”
On the other hand, this is defined differently by his fellow scientist, Sanket Thakur:
“All that is happening is that plants get a direct supply of carbohydrates and sugar which in turn boosts the plants’ immunity and the plantation on the whole ends up yielding a better crop.”
Coke in America is rich in high fructose corn syrup which might serve as an effective pesticide since it is a concentrated cocktail of the simple sugars fructose and glucose.
Yet, the Pepsi sales manager at the time in Chhattisgarh,  Anupam Verma, claims that even though the sales figures in rural areas of the state increased by 20%, this is not the reason for it.
“If there was any truth in these claims then we would rather be selling our product as a pesticide rather than soft drinks. There is more money in selling pesticides than in selling soft drinks. Their claim smacks of lies. At best it is idle matter.”
CSE scientists H. B. Mathur and Sapna Johnson claimed that their basic inference was that the manufacturers of the soft drinks were drawing their water supplies from groundwater, which is greatly contaminated by years of indiscriminate use of various pesticides.
A study conducted by the government’s Central Ground Water Board (CGWB) and the Central Pollution Control Board (CPCB)  found high pesticide residues in the groundwater around Delhi, as well as traces of lead, cadmium, and chromium, excessive salinity, and nitrate and fluoride content.

Moreover, the samples of popular soft drinks which were tested in the CSE laboratories were found to have no pesticides, even though over 95% of them are made with municipal water supplies which contain the same toxins and pharmaceuticals in our drinking water, such as: estrone, fluoride, sulfamethoxazole, arsenic, atrazine, chlorine, atenolol, trimethoprim carbamazepine, and gemfibrozil.
In comparison to the one of the bottled water industry, the CSE found that the regulations for the powerful and massive soft drinks industry are much weaker, and do not regulate the cold drink quality properly.

In the end, even though we are perfectly aware of the fact that cola used as a pesticide is not completely organic or natural, it is definitely safer that other conventional pesticides!