Do you read nutrition labels before you buy? If so, you’re not alone.
Unless you’re a nutritionist or dietitian, reading nutrition labels will probably introduce you to numerous ingredients you don’t recognize.
One ingredient you’ll encounter in many foods is maltodextrin. It’s a common additive in many processed foods, but is it bad for you? And should you avoid it? 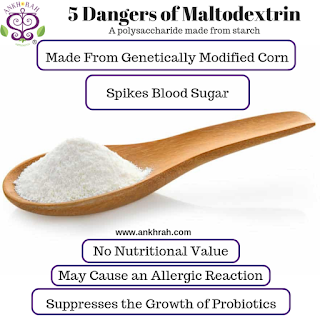 How is maltodextrin made?

Maltodextrin is a white powder made from corn, rice, potato starch, or wheat.
Even though it comes from plants, it’s highly processed. To make it, first the starches are cooked, and then acids or enzymes such as heat-stable bacterial alpha-amylase are added to break it down further. The resulting white powder is water-soluble and has a neutral taste.
Maltodextrins are closely related to corn syrup solids, with the one difference being their sugar content. Both undergo hydrolysis, a chemical process involving the addition of water to further assist breakdown.
However, after hydrolysis, corn syrup solids are at least 20 percent sugar, while maltodextrin is less than 20 percent sugar.

The U.S. Food and Drug Administration (FDA) has approved maltodextrin as a safe food additive. It’s also included in the nutritional value of food as part of the total carbohydrate count.
According to the Dietary Guidelines for Americans, carbohydrates should make up no more than  of your overall calories. Ideally, most of those carbohydrates should be complex carbohydrates that are rich in fiber, not foods that quickly raise your blood sugar.
If you have diabetes or insulin resistance, or if your doctor has recommended a low-carbohydrate diet, you should include any maltodextrin you eat in your total carbohydrate count for the day.
However, maltodextrin is usually only present in food in small amounts. It won’t have a significant effect on your overall carbohydrate intake.
Maltodextrin is high on the glycemic index (GI), meaning that it can cause a spike in your blood sugar. It’s safe to consume in very small amounts, but those with diabetes should be particularly careful.
Diets consisting of largely low-GI foods are beneficial for everyone, not just people with diabetes. 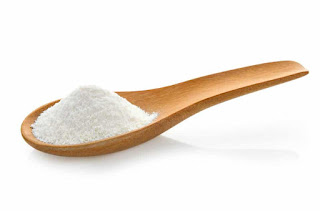 Why is maltodextrin in your food?

Maltodextrin is generally used as a thickener or filler to increase the volume of processed food. It’s also a preservative that increases the shelf life of packaged foods.
It’s inexpensive and easy to produce, so it’s useful for thickening products such as instant pudding and gelatins, sauces, and salad dressings. It can also be combined with artificial sweeteners to sweeten products such as canned fruits, desserts, and powdered drinks.
It’s even used as a thickener in personal care items such as lotion and hair care products.

What’s the nutritional value of maltodextrin?

Maltodextrin has 4 calories per gram — the same amount of calories as sucrose, or table sugar.
Like sugar, your body can digest maltodextrin quickly, so it’s useful if you need a quick boost of calories and energy. However, maltodextrin’s GI is higher than table sugar, ranging from 106 to 136. This means that it can raise your blood sugar level very quickly.

When should you avoid maltodextrin?

The high GI of maltodextrin means it can cause spikes in your blood sugar level, especially if it’s consumed in large amounts.
Because of this, you may want to avoid or limit it if you have diabetes or insulin resistance. It should also be avoided if you’re predisposed to developing diabetes. Another reason to limit maltodextrin is to keep your gut bacteria healthy.
According to a 2012 study published in PLoS ONE, maltodextrin can change your gut bacteria composition in a way that makes you more susceptible to disease. It can suppress the growth of probiotics in your digestive system, which are important for immune system function.
The same study showed that maltodextrin can increase the growth of bacteria such as E. coli, which is associated with autoimmune disorders like Crohn’s disease. If you’re at risk for developing an autoimmune or digestive disorder, then avoiding maltodextrin may be a good idea.

If you’re trying to lose weight, you will want to avoid maltodextrin.
It’s essentially a sweetener and a carbohydrate with no nutritional value, and it causes an increase in blood sugar. The levels of sugar in maltodextrin can lead to weight gain.

Finally, because it’s often used as a cheap thickener or filler, maltodextrin is usually manufactured from genetically modified (GMO) corn.
According to the , GMO corn is safe, and it meets all of the same standards as non-genetically modified plants.
But if you choose to avoid GMO, that doesn’t mean you need to avoid all foods that contain maltodextrin. Any food that’s labelled organic in the United States must also be GMO-free.

Is maltodextrin OK for people with diabetes?

Since maltodextrin has the potential to cause fast increases in blood sugar levels, people with diabetes would be better off largely avoiding it.
However, maltodextrin is often safe in small doses. You should be fine as long as you’re only consuming maltodextrin in small amounts and counting it in your carbohydrate total for the day.
If you’re unsure how it will affect your blood sugar, check your glucose levels more often when you add maltodextrin into your diet.
Signs that maltodextrin has caused your blood sugar to spike include:
If you experience any of these symptoms, check your blood sugar levels immediately. If they’re too high, contact your doctor.
Some artificial sweeteners are thought of as better choices for blood sugar management. However, new research is dispelling that myth by revealing that artificial sweeteners affect gut bacteria and indirectly affect insulin sensitivity.

Is maltodextrin ever good for you?

Maltodextrin has a variety of benefits.
Purchase: Shop for maltodextrin.

Because maltodextrin is a fast-digesting carbohydrate, it’s often included in sports drinks and snacks for athletes. For bodybuilders and other athletes trying to gain weight, maltodextrin can be a good source of quick calories during or after a workout.
Since maltodextrin doesn’t use as much water to digest as some carbohydrates, it’s a good way to get quick calories without becoming dehydrated. Some research also shows that maltodextrin supplements can help maintain anaerobic power during exercise.

Some people with chronic hypoglycemia take maltodextrin as part of their regular treatment. Because maltodextrin causes a faster increase in blood sugar, it’s an effective treatment for those who struggle to maintain normal blood sugar levels.
If their glucose level gets too low, they have a quick solution.

There is some evidence that maltodextrin’s fermentation in the intestines could act as an agent that helps prevent colorectal cancer.
A recent study found that Fibersol-2, a form of digestive-resistant maltodextrin, had antitumor activity. It prevented tumour growth without any apparent toxic side effects.

A study in the European Journal of Nutrition found that digestion-resistant maltodextrin had positive effects on overall digestion. It improved intestinal functions such as colonic transit time, stool volume, and stool consistency.

What are some alternatives to maltodextrin?

Common sweeteners that are used in home cooking instead of maltodextrin include:
These are all sweeteners that can cause spikes and increases in your blood sugar levels, just like maltodextrin. Consider using pureed, mashed, or sliced whole fruits to sweeten foods for a bounty of fiber, sweetness, vitamins, minerals, antioxidants, and water content.
Other thickening agents such as guar gum and pectin can be used as substitutes in baking and cooking.
Sweeteners that may not affect your blood sugar levels as much, as long as they’re consumed in moderation, include:
Sugar alcohols such as polydextrose are used to sweeten foods, and can be found in processed foods that have the label “sugar-free” or “no added sugar.”
Sugar alcohols are only partially absorbed by the body, which prevents them from having the same impact on blood sugar as other sweeteners.
Even so, they should still be limited to 10 grams a day to prevent gastrointestinal side effects such as flatulence. Erythritol is reported to often be more tolerable.

Like sugar and other simple carbohydrates, maltodextrin can form part of a healthy diet, but it shouldn’t be the main course, especially for people with diabetes and those who want to maintain their weight.
As long as you limit it, and balance it with fiber and protein, maltodextrin can add valuable carbohydrates and energy to your diet for athletes and those who need to increase blood sugars.
Source: https://www.healthline.com/health/food-nutrition/is-maltodextrin-bad-for-me

Don't forget to opt-in to Our Healthy Living Society and get 3 free gifts while receiving the latest information on health, well-being and groundbreaking news about natural nutrition.
Posted by Ankh Rah Healthy Living Blog at 09:14