How a vitamin cured my anxiety

How a vitamin cured my anxiety: Elisa Black’s story of lifelong struggle and new hope for the future MY anxiety is a wild beast. It has destroyed relationships, clawed at my insides until I was sick, left me cowering under blankets, plagued me with panic attacks and tipped me into post-natal depression following the birth of my first son.
I was nervous from the beginning.
As a toddler I saw a neighbour fall into a puddle and was — for years — plagued by thoughts of the “drowning hole”. I would dream of it, obsess about it, when I closed my eyes at night I would see it appearing suddenly and unexpectedly outside my house, engulfing my baby brother or unsuspecting parents.
I could not be convinced that I was safe.
In primary school I was obsessed with leprosy. As ridiculous as it now sounds I would lie awake, night after night after night, wondering if tomorrow would be my last day on Earth as I disintegrated due to rapid-onset rotting.
As a teen a phobia of vomiting — something that is far, far more common than you might think — meant I was too scared to eat around other people in case I threw it all back up in front of them.
And as a young adult it manifested as panic attacks. I was convinced my body could not tolerate heat and even seeing someone sweating on television could tip me into a full-blown panic attack.
At 25 I had to move back home with my parents and didn’t leave my room for three months, convinced that I would die if I did.
For more than a decade, I have sought a cure. Some things have helped for a while, others not at all, and always anxiety was there in some way. The eternal feeling something catastrophic was about to happen. I have taken medication — Aropax, Cipramil, Effexor, Zoloft to name but a few — tried Cognitive Behavioural Therapy, hypnosis, exposure therapy, visited psychologists and psychiatrists and naturopaths and herbalists and more.
I’ve doggedly practised yoga, meditated morning and night, exercised feverishly to try and get rid of the adrenalin coursing through my veins.
I’ve sought solace in wine and avoided anxiety-inducing situations to the point of agoraphobia. And, for the last year, my anxiety has edged ever closer to depression, as I berated myself for not being good enough to beat what so many seem to view as a personal failing, something I should be able to control if I just tried hard enough.
Yet today my beast, finally, is a paper tiger, a tiny shadow in the corner of my heart. It wasn’t drugs or therapy or deep-bloody-breathing that finally slayed it though. It was a vitamin.
For years, decades, I was looking outside for the answer, when I should have been looking inside all along. Looking at my genes. Because it turns out I have a genetic mutation on one of my genes, one with the rather apt acronym MTHFR. The result is that my body has trouble processing B-group vitamins.
But here’s the thing: I am far from being alone. The genetic mutation also affects close to one in five people and could be responsible for everything from mood disorder or multiple miscarriages to strokes, cardiovascular disease, diabetes and many other illnesses.
And the good news is that the potential treatment — folinic acid — is cheap, relatively easy to find and side-effect free.
The distinction between folinic acid and the common dietary vitamin, B9 or folic acid, is an important one. Variations in the MTHFR gene mean I am unable to convert folic acid into a form my body can use — folinic acid — easily. That, in turn, can lead to a Pandora’s Box of health problems.
Stirling’s Dr Andrew Owen, that comforting medical mix of compassion and curiosity, has been listening to me bang on about my anxiety for more than 10 years.
I first saw him after 12 months of virtually constant panic attacks had stripped 10kg from my frame, caused relentless insomnia and had driven me home from a life overseas, having left a relationship in ruins and on the edge of a nervous breakdown.
He helped me tone down my more manic side with drugs and psych referrals but anxiety had never entirely left me, ready to rear its ugly head in times of stress or when the kids get sick and I suddenly think that weird rash is smallpox (modern eradication be damned) or in the small hours of the night when the tiniest thing can seem like the gravest catastrophe.
Six months ago he suggested I, along with many of his patients, be tested for a MTHFR variation. Aware of research in the area for the last six or so years and the benefits that had been observed from taking folinic acid, Owen conducted his own specific research before deciding to see if it could help others.
“Like any good doctor I tried it on myself first and quickly became aware of a substantial rise in my energy levels,” he says. “After a few of my patients responded dramatically I thought this could be something to use on those who didn’t respond to SSRIs (a type of antidepressant).” 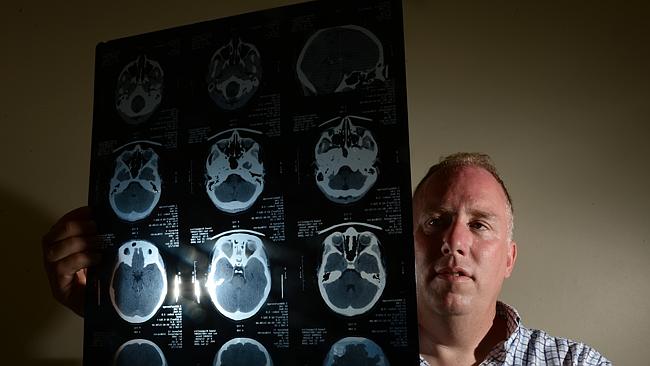 Adelaide Hills general practitioner Dr Andrew Owen. Picture: TRICIA WATKINSON Source: News Limited
But, like so much in medicine, the effects of the treatment aren’t utterly predictable.
“Some people with a double mutation don’t necessarily respond dramatically to folinic acid, which is why I use a methyl B12 in combination as there might turn out to be other pathway disorders,” he says. “I’m treating at least a couple of hundred patients with this now.”
And those patients don’t only include those with anxiety or depression. The doctor has seen improvements in people with fibromyalgia, migraine and hypertension; kids with ADHD and autism.
And then there is me.
As one of Owen’s first patients to try the treatment, my reaction was a bit of an unknown quantity. “But you had one of the most dramatic improvements,” he says. “I have had two or three others with anxiety have a similar response and a large number have found their anxiety has reduced substantially. But I haven’t been able to predict who will work brilliantly on it until I’ve tried it. I’ve met people with a double copy of the genetic variation who haven’t had much in the way of symptoms. There seems to be a link between personality and genetics.
“But I absolutely think this needs a greater GP awareness. There are a large number of people out there who aren’t aware that they could be feeling better.”
The link between MTHFR mutations, mood disorders and neurodevelopmental problems is not new information to scientists, even though adoption of testing by the broader medical community appears to be a rarity.
Studies have shown homocysteine levels can predict the length someone might suffer from post-traumatic stress disorder, that B vitamins have been observed to relieve premenstrual anxiety, and that MTHFR variations are associated with major depression, bipolar disorder and schizophrenia.
A study in Northern Ireland found a MTHFR variation was associated with an increased risk of depressive episodes. A 2011 study reported a possible link between a different MTHFR variation and ADHD.
A recent study in Arkansas, published in the journal Molecular Psychiatry, found that a group of children with autism who were treated with folinic acid showed significant improvements in verbal communication, receptive and expressive language, attention and stereotypical behaviour. About one third of treated children demonstrated moderate to much improvement.
Studies that definitively prove a link with anxiety are thinner on the ground.
Trying to find a comprehensive study that looks at the possible link between MTHFR variations and anxiety is tricky, even though its link to other mood disorders is extensively researched.
But if you Google “MTHFR and anxiety” you will find more than 129,000 pages devoted to it — most created by people looking for answers.
That my anxiety has a genetic link is, on reflection, no great surprise to me.
My maternal grandfather had what was then known as a “nervous breakdown” and was prone to bouts of melancholy.
My maternal grandmother would suffer from constant nervous attacks that would leave her feeling “oomi”, forcing her to rely heavily on Valium in a time when mental health was neither discussed nor publicly acknowledged.
My mum, who has had her own battles with a kind of social phobia, remembers her own health being constantly checked by her mother. Walking past she would raise a wrist to my mum’s forehead and, at the first hint of illness, Mum would be packed off to bed and checked upon compulsively. I have seen this same behaviour in my treatment of my sons. A temperature can be enough to send me off into wild paroxysms of hysteria, imagining every possible catastrophic outcome befalling my bewildered, if snotty, child.
Truth-be-told, Mum’s side of the family is littered with us crazy types, all of us muddling along as best we can, desperately trying to look normal while we indulge in the various routines, compulsions and obsessions that help us feel like we have some kind of control over our anxiety or depression.
If only I’d known that something as simple — and free of side effects — as B vitamins was a credible option before I spent all my money on enough hand sanitiser to keep all the world’s bacteria at bay. And while better sceptics than me have pointed out that anecdotes are not scientific evidence, allow me to share a local success story or two. Lutske Rayner felt a change within a month of taking folinic acid. Picture: MATT TURNER Source: News Limited
Heathfield mother-of-three Lutske Rayner, 59, had tried to treat her depression with antidepressants for more than 20 years.
“I just generally felt like crap,” she says. “I’d been on medication for many years, felt tired all the time, I was eating well but not losing weight, I had no enthusiasm for life.”
Tor further reading: http://www.news.com.au/national/south-australia/how-a-vitamin-cured-my-anxiety-elisa-blacks-story-of-lifelong-struggle-and-new-hope-for-the-future/story-fnii5yv4-1227251037624
Posted by Ankh Rah Healthy Living Blog at 07:19