NEXT STORY LOVE MAC & CHEESE? STUDY SHOWS IT COULD CONTAIN HARMFUL CHEMICALS THAT ARE ALREADY BANNED IN CHILDREN’S TOYS! 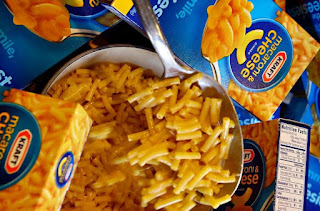 Phthalates, a group of chemicals used to soften and increase the flexibility of plastic and vinyl, have been banned from children’s toys for about 10 years. However, researchers have recently found them in children’s food. The report was conducted by an independent laboratory and paid for by environmental advocacy groups, though it has not been published in a peer-reviewed journal.
Known to disrupt hormones, cause birth defects, and provoke learning and behaviour problems in older children, phthalates have long been controversial, and this news only heightens the growing concerns people have regarding processed foods. And the biggest culprit? The all-time favourite, mac and cheese.
The new study of 30 cheese products determined that phthalates were present in all but one of the samples tested. They found the highest concentrations to be in the processed cheese powder that makes boxed mac and cheese mixes so popular.
“The phthalate concentrations in powder from mac and cheese mixes were more than four times higher than in block cheese and other natural cheeses like shredded cheese, string cheese and cottage cheese,” said Mike Belliveau, executive director of the Environmental Health Strategy Center, one of four advocacy groups that funded the report. The other groups include the Ecology Center, Healthy Babies Bright Futures, and Safer States.
Food manufacturers don’t intentionally add phthalates to their mixes, but we nevertheless face the consequences of the chemical being used in plastics or packaging ink.
The researchers were motivated to test cheese following a 2014 scientific review that said dairy products are “the greatest source of dietary exposure” to DEHP — the phthalate pointed out as the most commonly banned. This recent research found DEHP to be the most common, and in higher average concentrations than other phthalates.
The study tested 10 different varieties of mac and cheese, including ones labeled organic, and found high levels of phthalates in all of them. All of the products were purchased in the United States and shipped in the original packaging to VITO, the Flemish Institute for Technological Research in Belgium. Here, fat samples were taken from each product, analyzing 13 phthalates via validated test methods.
“Our belief is that it’s in every mac ‘n’ cheese product — you can’t shop your way out of the problem,” said Belliveau. The researchers are urging Kraft to take action, as nine of the tested products were made by the company.
The Food and Drug Administration (FDA) has not banned phthalates in food, but environmental and food safety groups petitioned the FDA last year to remove all phthalates from food, food packaging, and food processing and manufacturing equipment. According to Tom Neltner, chemicals policy director for the Environmental Defense Fund, the petition has been delayed temporarily for technical reasons.
Mike Schade, the campaign director for Safer Chemicals, Healthy Families, pointed out that the switch to phthalate-free packaging isn’t a tedious one. “The good news is that there are safer, affordable alternatives to phthalates,” he said. “Kraft should identify and eliminate any phthalates in its cheese products by ensuring that safer alternatives are used in food processing and packaging materials throughout its supply chain.”
http://www.collective-evolution.com/2017/07/31/love-mac-cheese-study-shows-it-could-contain-harmful-chemicals-that-are-already-banned-in-childrens-toys/

Click Here For More Articles
Don't forget to optin to Our Healthy Living Society, for the latest information on health, wellbeing and groundbreaking news about natural nutrition.
Posted by Ankh Rah Healthy Living Blog at 11:30