Reebok Wants an Academy Award for the Best Fitness Trainer! 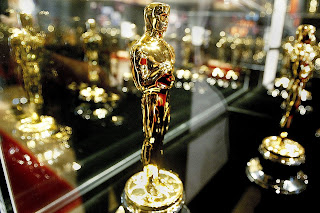 In an open letter to the Academy, Reebok president Matt O’Toole made a case for awarding an Oscar to the trainer who best preps their cast for a movie role.
“There are hundreds of major motion picture actors and actresses that transform their bodies for roles each year,” O’Toole writes in the letter, posted on Reebok’s website. “Fans cheer for them during thrilling stunt scenes and weep for them when their characters lose a pinnacle fight.”
“While their performances are lauded, their practice is not. The best scenes and storylines today often require amazing physical transformations, and actors and actresses rely heavily on a small field of expert trainers to get them in fighting, flying and filming shape.”
O’Toole argues that the Academy already gives out Oscars to makeup artists and hairstylists who transform actors for the look of the film, and points out that trainers — like Charlize Theron‘s for Atomic Blonde, or Chris Pratt‘s for Guardians of the Galaxy — do the same job.
“Why not also reward the people who keep our role models in peak condition?” O’Toole says.
“Let’s call attention to this group and reward their hard work with the rigors of other motion picture crafts. No longer will these be the unsung heroes of summer blockbusters but instead role models for fans everywhere.”
http://people.com/bodies/oscar-best-fitness-trainer-reebok/

Click Here For More Articles
Don't forget to optin to Our Healthy Living Society, for the latest information on health, wellbeing and groundbreaking news about natural nutrition.
Posted by Ankh Rah Healthy Living Blog at 23:33