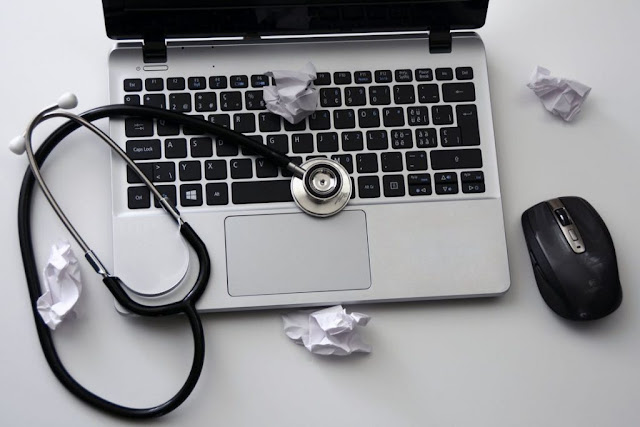 By Grant Bailey
Three quarters of Brits have cured an ailment or illness after Googling the symptoms on the internet, a study found.
Research revealed that seven in ten of us now self-diagnose and treat minor health issues rather than try and secure an appointment with their local GP.
It also emerged the average adult now believes they can beat two thirds of all bugs, viruses and illnesses without professional medical attention.
And that has lead to the typical adult only actually visiting their doctor twice a year.
A spokesperson for Future You, which commissioned the study, said: “I know a lot of people who would rather soldier on than go and see a doctor for a cough or a cold.
“And a lot of people with less severe symptoms know that a bit of rest, some healthy food and a good night's sleep can be enough to let you recover and set you straight again.”
The study also found 75 per cent of Brits have warded off sickness with a trusty home remedy in the past.
And more than seven in ten are convinced a change to their diet at one time or another in their lives has helped to improve their general health.
Despite our inquisitive ways, only one third of keen 'keyboard doctors' have ever made their GP aware they have researched their symptoms ahead of their visit.
When illness occurs, two in five of us are reluctant to book an appointment with our GP, preferring to treat the symptoms ourselves or wait for the problem to resolve itself.
Seventy eight per cent are unlikely to bother their GP if they came down with a cold, and a quarter would rather wait for their conjunctivitis to clear up on its own rather than book an appointment.
Two thirds reckon they have the means at home to cure themselves of a troubling cough, and sixty four per cent are prepared should a sore throat strike.
One in five Brits surveyed by OnePoll wouldn’t deem arthritis or joint pain a serious enough ailment to warrant a visit to the doc, and 66 per cent would avoid the dentist’s chair even if a toothache flared up.
However, chest pain raises particular concerns, with only four per cent confident they could identify the cause of a sore chest, and nine in ten aren’t sure in their abilities to clear up a chest infection without specialist advice.
When it comes to trusty home remedies three in five swear by a hot glass of honey and lemon to beat a croaky throat, and 17 per cent turn to citrus fruit to reduce symptoms when suffering from a fever.
According to self-treating Brits it’s mum who’s most likely to recommend a home remedy when ill-health hits, but one in ten have even been recommended an obscure cure by their doctor.
Forty one per cent take pre-emptive health action and add supplements and vitamins to give their diet a boost.
When it comes to popular food health trends, one in six are familiar with the 80/20 diet, and twelve per cent believe they could identify inflammation-fighting foods like Turmeric.
Twenty six per cent believe Turmeric can help to increase the level of antioxidants in the body, and one in ten think the plant can help to improve brain function.
The spokesperson added: ” Turmeric has been used as a traditional remedy in India for thousands of years including for coughs and colds. Only more recently have we learned that the good stuff in turmeric is curcumin.
“And the secret to getting more of the good stuff to your body is to use other ingredients to boost absorption (bioavailability) as we do by using soy lecithin in Turmeric+.”
TOP 20 AILMENTS MOST LIKELY TO BE TREATED AT HOME1. Common cold2. Sore throat3. Headache4. Cough5. Cold sore6. Diarrhoea7. Toothache8. Warts / verucas9. Acne10. Fever11. Insomnia12. Haemorrhoids13. Earache14. Eczema15. Conjunctivitis16. Allergic reaction17. Arthritis and joint pain18. Swollen glands19. Bunion20. Chest infectionENDS

Don't forget to opt-in to Our Healthy Living Society and get 3 free gifts while receiving the latest information on health, well-being and groundbreaking news about natural nutrition.
Posted by Ankh Rah Healthy Living Blog at 09:00