8 ingredients to add to your plate for more peace of mind this autumn!

Fall is full of warm colors, cooler weather and festive holiday meals.
But with the days growing shorter and the long winter months looming ahead, you may start to feel the edges of the seasonal blues.
That makes now a great time to start looking out for your mental health.
And you're in luck: squashes, spices and spuds that are seasonal now aren't just good for your table - they're good for your brain, too.
Dietitian and blogger Abbey Sharpe of Abbey's Kitchen told Daily Mail Online which fall foods have protective effects for your mental health and boost your mood.

1. ACORN SQUASH KEEPS YOUR CELLS SAFE FROM FREE RADICALS
This hearty gourd was the first crop raised by Native Americans.
It's a bit difficult to work with, but has become an autumnal favorite in the US.
Plus it has protective effects for your cells, combating aging in your body and your brain. 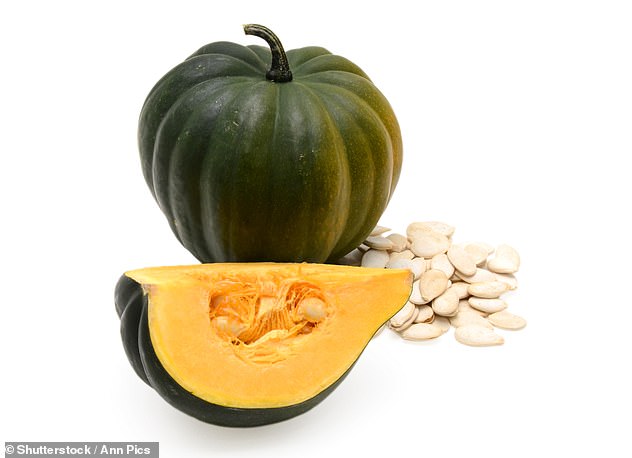 'Acorn squash is one of the best sources of the antioxidant beta carotene, an antioxidant that protects our cells and DNA from damage,' Abbey says.
Our cell processes have byproducts called free radicals. The stress and damage these unstable compounds do to cells is called oxidative stress.
The older we get, the more oxidation builds up and damages our cells, and that damage can contribute to the development of mental and mood disorders.
'Antioxidants from fruit and vegetable intake were lower in individuals with late-life depression! It’s also rich in magnesium which may be associated with a decline in depressive symptoms,' Abbey says.
2. AN APPLE A DAY HELPS KEEP ALZHEIMER'S AWAY
Apple-picking season has just ended, so it's now time to make a pie, a tart or just have a lunch time snack.
And the saying 'an apple a day keeps the doctor away' didn't become a cliche without reason.
The all-American fruit is low-calorie, but packs a heavy dose of fiber, potassium, and vitamins A, B, E and K. 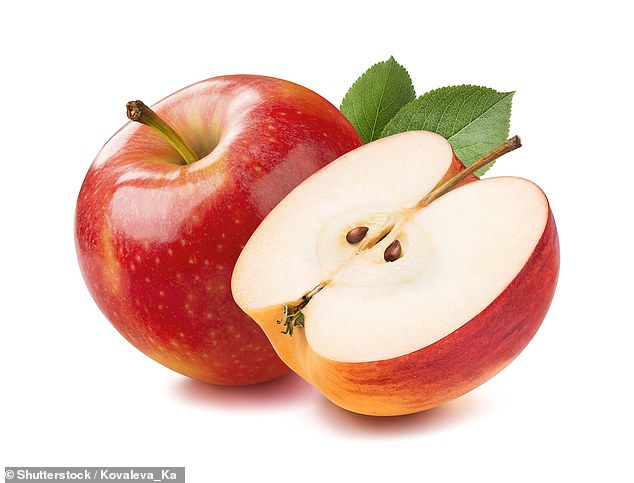 Acetylcholine in apples helps keep your mind healthy, mood stable, and may protect against Alzheimer's disease.
Like squash, apples contain antioxidants - a whole litany of strong ones, in fact.
'Apples contain a rich source of antioxidants which play a protective role against neurological disorders like Alzheimer’s disease,' Abbey says.
They are rich in acetylcholine as well, which may also help to guard your brain against diseases of mental decline.
Plus, fiber is not only beneficial for your overall digestion, but helps to stabilize your blood sugar which in turn helps to keep your mood stable.
3. ROASTING UP SOME PUMPKIN COULD BOOST SEROTONIN TO LEVEL OUT YOUR MOOD
Besides making good carved, decorative heads, pumpkins are good for your head.
Perhaps most importantly, pumpkin encourages the brain's production of serotonin. Pumpkin contains the same hormone - tryptophan - that makes us feel tired after eating a turkey dinner.
Serotonin helps us stabilize our minds and bodies. The neurotransmitter plays a crucial role in keeping our digestion as well as our moods stable, and promoting the feeling over overall 'well-being.' 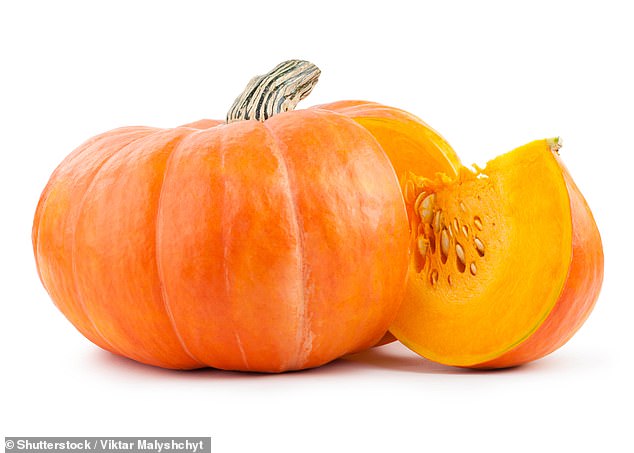 Move over, turkey: pumpkin has plenty of tryptophan, the sleepy amino acid found in turkey.  Tryptophan plays a crucial role in serotonin production, which stabilizes mood
And tryptophan, which pumpkins are rich in, is the key ingredient in serotonin production.
'Pumpkin also contains two important antioxidants, lutein and zeaxanthin, which play a role in overall cognitive health,' Abbey said.
'One recent 2017 study found that these antioxidants improved the memory and overall cognitive health in older adults.'
4. THE REAL 'ZEN' POWER OF PUMPKINS IS IN TRYPTOPHAN-LOADED SEEDS
The flesh of a pumpkin contains the healthy amino acid, the gourd's seeds are where the mother load lies.
In 100 grams of pumpkin seeds - about two thirds of a cup - there are about 1,000 grams of tryptophan.
That's a lower-calorie way to get as much tryptophan as you would in a turkey breast.
'Tryptophan which have been shown to decrease depressive symptoms and decrease anxiety,' says Abbey.
'Pumpkin seeds also contain zinc which can act on the brain directly and can play a significant role in learning and memory,' she adds.
5. TRENDY SPICE TURMERIC MAY MAKE YOUR MOOD MORE MELLOW
Turmeric is all the rage right now, for both your curry and your health.
The spice has historically been popular in Southeast Asian cooking, but lately it has become a full-on health fad.
Some have pushed it as a cancer cure or Alzheimer's treatment, but science doesn't really bear those claims out.
But it, too, contains antioxidants and may have anti-inflammatory effects. 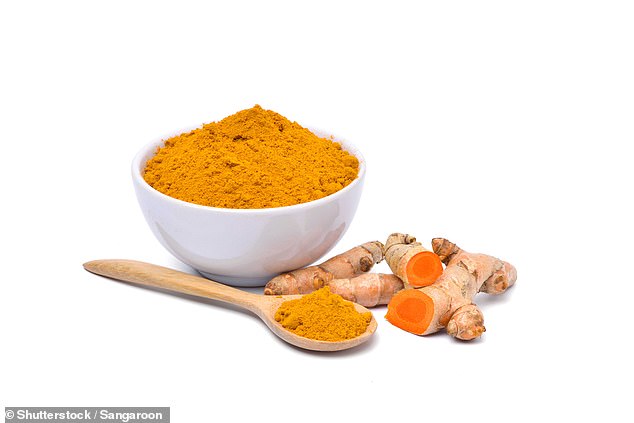 +6
Turmeric is trendy for purportedly doing everything - but its anti-inflammatory and antioxidant effects really might help your mind
These two qualities were the initial basis for the meteoric rise of the spice, and they have full-body benefits.
That includes its effects on the brain.
Inflammation is thought to contribute to mood instability and depression, so any spice or snack that can alleviate swelling may help mental health, too
Plus, 'curcumin which is found in turmeric and gives it its yellow color may play a role in preventing memory problems,' Abbey says.
6. BUTTERNUT SQUASH IS 'GOLD' FOR FIGHTING DNA DAMAGE IN THE BRAIN
This squash may be unwieldy to dice, roast or puree, but its mental benefits might well be worth the the effort.
'Butternut squash is chalk full of antioxidants like beta carotene, vitamin C, vitamin E which may play a significant role in improving anxiety and depression, Abbey says.
The key is in its iconic color. 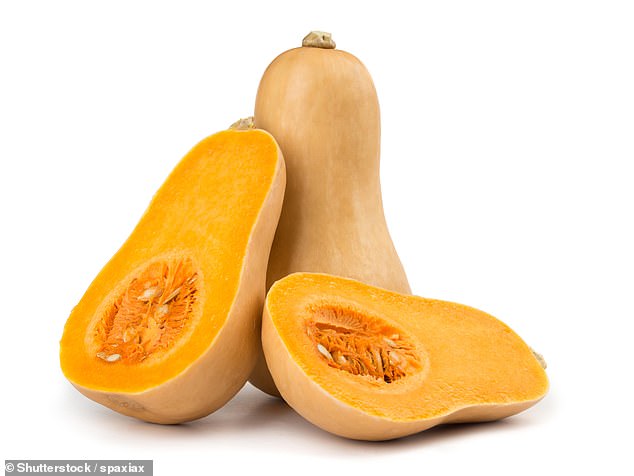 +6
The orange-y color of butternut squash signals its carotene content. Higher levels of htis antioxidant have also been linked to lower rates of depression
Carotene, a potent antioxidant found in orange fruits and vegetables like this squash and carrots, has been shown to have particular importance to mental health.
One study of nearly 1,800 people found that those who had high levels of caortenids in their bloodstreams were 37 percent less likely to be depressed than those with lower carotenid levels.
And once more carotene was introduced into their diet, people's depression symptoms seemed to become more mild.
7. YOU CAN TASTE THE MENTAL BENEFITS IN BRUSSELS SPROUTS' FLAVONOIDS
These hearty sprouts 'contain the antioxidant kaempferol and according to an animal study may have an antidepressant effect', said Abbey.
Kaempferoli is a flavonoid found in coarser green, leafy vegetables.
Research on kaempferoli is still nascent, but so far, it's looking promising. It contributes not only taste but potential health benefits like fighting inflammation and perhaps obesity and cancer, some studies have suggested.
In the animal study, a group of stressed out mice were fed kaempferol doses, and the substance seemed to calm the anxious animals.
But, Abbey reminds us: 'Again, more research is needed before we can make a clear link.'
8. GET A LOW-SUGAR INFUSION OF VITAMIN C FROM SWEET POTATOES TO PROTECT YOU FROM FEELING LOW
Sugar-loaded orange juice was once touted as the go-to way to get vitamin C.
That has since been debunked, but there's another sweet way to get the nutrient: spuds.
Sugar can actually contribute to mood instability as you ride the wave of sugar highs and crashes. 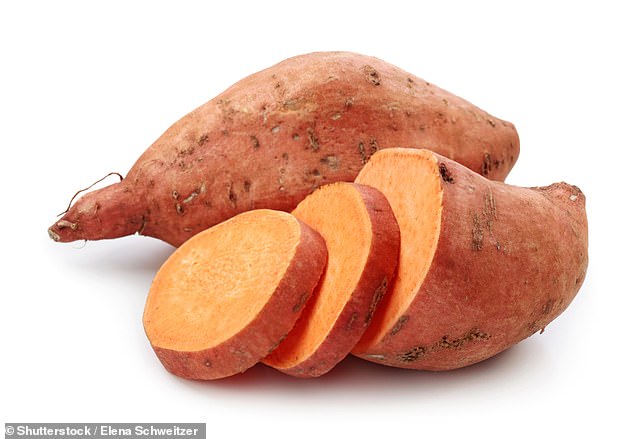 Instead of drinking sugar-loaded orange juice in hopes of boosting your vitamin C levels, have a yam. Sweet potatoes contain vitamins B6 and C, both of which stabilize mood
Sweet potatoes, on the other hand 'are rich in antioxidants including vitamin C. At least study found that a high vitamin C status was associated with improved overall mood,' Abbey says.
Yams are also rich in B6, low levels of which may contribute to low moods.

Between these seven ingredients, there's plenty of mentally healthy food to put on your plate this fall.