Anxiety is a common problem for many people.

It’s a disorder characterized by constant worry and nervousness and is sometimes related to poor brain health. Medication is often required as treatment.
Aside from medication, there are several strategies you can use to help reduce anxiety symptoms, from exercising to deep breathing.
Additionally, there are some foods you can eat that may help lower the severity of your symptoms, mostly due to their brain-boosting properties.
Here are 6 science-backed foods and beverages that may provide anxiety relief.

Salmon may be beneficial for reducing anxiety.
It contains nutrients that promote brain health, including vitamin D and the omega-3 fatty acids eicosapentaenoic acid (EPA) and docosahexaenoic acid (DHA) (1, 2, 3, 4).
EPA and DHA may help regulate the neurotransmitters dopamine and serotonin, which can have calming and relaxing properties.
Additionally, studies show these fatty acids can reduce inflammation and prevent brain cell dysfunction that leads to the development of mental disorders like anxiety.
Consuming adequate amounts of EPA and DHA may also promote your brain’s ability to adapt to changes, allowing you to better handle stressors that trigger anxiety symptoms (5).
Vitamin D has also been studied for the positive effects it may have on improving levels of calming neurotransmitters (6, 7).
Even a few servings of salmon a week may be enough to promote anxiety relief.
In one study, men who ate Atlantic salmon three times per week for five months reported less anxiety than those who ate chicken, pork or beef.
Moreover, they had improved anxiety-related symptoms, such as heart rate and heart rate variability (8).

SUMMARY:Salmon is high in omega-3 fatty acids and vitamin D, which may assist in anxiety relief by promoting brain health.

Chamomile is an herb that may help reduce anxiety.
It contains high amounts of antioxidants proven to reduce inflammation, which might decrease the risk of anxiety (9, 10, 11).
Several studies have examined the association between chamomile and anxiety relief.
They’ve found that those diagnosed with generalized anxiety disorder (GAD) experienced a significantly greater reduction in symptoms after consuming chamomile extract, compared to those who did not (12, 13).
Another study found similar results, as those who consumed chamomile extract for eight weeks saw reduced symptoms of depression and anxiety (14).
While these results are promising, most studies have been conducted on chamomile extract. More research is necessary to evaluate the anti-anxiety effects of chamomile tea, which is most commonly consumed.

SUMMARY:Chamomile has been shown to help with anxiety reduction due to its antioxidant content and anti-inflammatory effects.3. 3.Turmeric


3.Turmeric is a spice that contains curcumin, a compound studied for its role in promoting brain health and preventing anxiety disorders (15, 16).
Animal and test-tube studies suggest that curcumin may boost the omega-3 fatty acid DHA in the brain by helping your body synthesize it more efficiently (15).
In one study, 20 mg/kg of curcumin produced significant anti-anxiety effects in stressed mice compared to those given a lower dose (17).
Curcumin also has powerful antioxidant and anti-inflammatory properties that have been shown to prevent damage to brain cells (9, 16, 18, 19, 20, 21, 22).
These effects are partly due to curcumin’s ability to reduce inflammatory markers, such as cytokines, which are often linked with anxiety development (9, 16, 23).
Additionally, curcumin consumption has been shown to increase blood antioxidant levels, which tend to be low in individuals with anxiety (22, 24).
More human research is needed to confirm all of these effects, but if you suffer from anxiety, incorporating turmeric into your diet is certainly worth a try.

SUMMARY:Turmeric contains curcumin, a compound with antioxidant and anti-inflammatory properties that may alleviate anxiety symptoms. 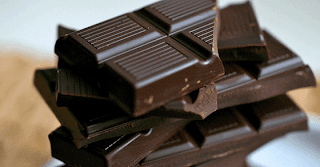 Incorporating some dark chocolate into your diet may also be helpful for easing anxiety.
Dark chocolate contains flavonols, which are antioxidants that may benefit brain function.
They do this by improving blood flow to the brain and promoting its ability to adapt to stressful situations (25, 26).
These effects may allow you to adjust better to the stressful situations that can lead to anxiety and other mood disorders.
Some researchers also suggest that dark chocolate’s role in brain health may simply be due to its taste, which can be comforting for those with mood disorders (26).
In one study, individuals who consumed 74% dark chocolate twice daily for two weeks had improved levels of stress hormones commonly associated with anxiety, such as catecholamines and cortisol (27).
Eating dark chocolate has also been shown to increase levels of the neurotransmitter serotonin, which may help reduce the stress that leads to anxiety (25, 28, 29, 30).
For example, in a study of highly stressed individuals, participants reported significantly lower levels of stress after consuming 40 grams of dark chocolate every day over a two-week period (28).
However, dark chocolate is best consumed in moderation, as it is high in calories and easy to overeat. 1–1.5 ounces is a reasonable serving size.

SUMMARY:Dark chocolate may be helpful for improving anxiety due to its stress-reducing antioxidants and ability to increase serotonin levels.

5. Yogurt
If you suffer from anxiety, yogurt is a great food to include in your diet.
The probiotics, or healthy bacteria, found in some types of yogurt can improve several aspects of your well-being, including mental health (31, 32).
Studies have shown that probiotic foods like yogurt may promote mental health and brain function by inhibiting free radicals and neurotoxins, which can damage nerve tissue in the brain and lead to anxiety (33, 34).
In one study, anxious individuals who consumed probiotic yogurt daily were better able to cope with stress than those who consumed yogurt without probiotics (35).
Another study found that women who consumed 4.4 ounces (125 grams) of yogurt twice daily for four weeks had better functioning of the brain regions that control emotion and sensation, which may be associated with lower anxiety levels (36).
These findings are promising, but more human research is necessary to confirm the beneficial effects that yogurt may have on anxiety reduction.
It is also important to note that not all yogurt contains probiotics. For the benefits of probiotics, choose a yogurt that has live active cultures listed as an ingredient.

SUMMARY:Yogurt contains probiotics, which may have a positive effect on brain health and anxiety levels.

Green tea contains L-theanine, an amino acid that has been studied for the positive effects it may have on brain health and anxiety reduction (37, 38, 39).
In one small study, people who consumed L-theanine experienced a reduction in psychological stress responses that are commonly associated with anxiety, such as increased heart rate (40).
Another study found that those who drank a beverage that contained L-theanine had decreased levels of cortisol, a stress hormone linked with anxiety (41).
These effects may be due to L-theanine’s potential to prevent nerves from becoming overexcited. Additionally, L-theanine may increase GABA, dopamine and serotonin, neurotransmitters that have been shown to have anti-anxiety effects (39, 41).
Moreover, green tea contains epigallocatechin gallate (EGCG), an antioxidant suggested to promote brain health. It may play a role in reducing certain symptoms by also increasing GABA in the brain (42).
One mouse study found that EGCG produced anti-anxiety effects similar to those of common anxiety medications (43).
The beneficial properties of L-theanine and EGCG may be a major reason why drinking several cups of green tea daily is associated with less psychological distress (44).
While all of these findings are promising, it is worth mentioning that most of the research on green tea and anxiety has been conducted in animals and test tubes. More human research is needed to confirm its anti-anxiety effects. 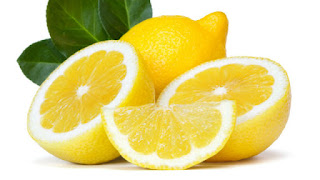 Other Foods That May Help With Anxiety
While some of the foods listed below have not been studied specifically for their anti-anxiety effects, they are rich in nutrients thought to improve related symptoms.


SUMMARY:Some foods contain specific nutrients that may promote brain health and help prevent anxiety or reduce the severity of your symptoms.

Overall, research is sparse on the topic of specific foods and anxiety prevention.
Most studies have been conducted on animals or in laboratories, and more high-quality human studies are needed.
However, there are several foods and beverages that may help you deal with your anxiety symptoms, as they may reduce inflammation and boost brain health.

How helpful was it?


How can we improve it?

Don't forget to opt-in to Our Healthy Living Society and get 3 free gifts while receiving the latest information on health, well-being and groundbreaking news about natural nutrition.
Posted by Ankh Rah Healthy Living Blog at 10:20