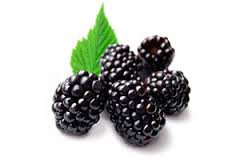 Black raspberries are already known to provide multiple benefits to health. Now a recent research has confirmed that black raspberries grown in Central Europe have greater health benefits than other berries, thanks to their astonishingly high levels of antioxidant.
berries make the top of the list as they contain potent antioxidants, which decrease or reverse the effects of free radicals — natural byproducts of energy production that can play havoc on the body and that are closely linked with heart disease, cancer, arthritis, stroke or respiratory diseases.
It is now widely accepted that consuming antioxidant-rich foods helps prevent cancer, cardiovascular disease, stroke, and even Alzheimer’s Disease (AD). When compared to other berries like raspberries or blackberries, black raspberries contain potent antioxidants, which decrease or reverse the effects of harmful molecules called free radicals, reveals the new research.
The molecules with unpaired electrons, free radicals are a natural byproduct of many bodily functions that have a well-deserved reputation for causing heart disease, cancer, arthritis, stroke or respiratory diseases.
The recent research from the University of Agriculture in Krakow in Poland now indicate that black raspberries have an extremely high overall level of antioxidants and health benefits compared to other berries.
To assess the antioxidant potential and health benefits of black raspberries, a team of researchers headed by Anna Magorzata Kostecka-Guga measured the content of phenolics and anthocyanins in black raspberries and compared them with red raspberries and blackberries.
After assessing the levels of phenolics and anthocyanins, the team found that antioxidant activity of natural products contribute to their superior health promoting properties.
The level of antioxidants in black raspberries was three times higher than the other berries under investigation, found the researchers.
Notably, the number was even higher for phenolics or the amount of anthocyanins which give berries their rich, dark color and work as antioxidant, with black raspberries topping other berries in the study by over 1,000 percent.
The study findings are published in the journal Open Chemistry.