Fall in strength and fitness of 10-year-olds, study shows! 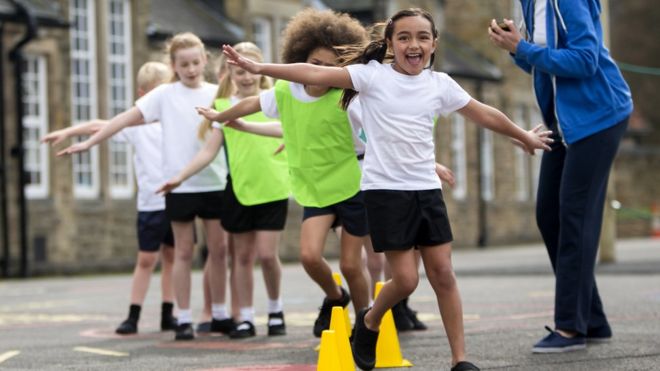 Children are weaker and less fit than they were 16 years ago, according to a British study.
Researchers compared the strength and fitness of 10-year-olds from Essex between 1998 and 2014.
They found children had become heavier and taller but scored worse in tests including sit-ups and grip strength - and the decline has been speeding up.
Authors said the findings were "worrying" and called for more fitness testing in schools.
Researchers from the University of Essex carried out strength and fitness tests, along with taking weight and height measurements, on 1,200 children from Chelmsford in 1998, 2008 and 2014.
They found that over that period, children's Body Mass Index (BMI) stayed broadly the same, because although they were heavier, they were also taller.
Authors had expected the children to be stronger and more powerful because they had grown bigger, but this did not prove to be the case.
According to Dr Gavin Sandercock, who led the study, there was a 20% decrease in muscle strength and a 30% decrease in muscle endurance over the 16-year period.
The children were tested on sit-ups, hand-grip strength, standing long-jumps, and bent-arm hanging.
The findings suggested children were doing less and less exercise, Dr Sandercock said.
"Inactive lifestyles are a health risk but physical fitness is the single best measure of health in childhood, adolescence and on into adulthood," he said.
"Poor fitness and inactivity lead to multiple health problems in their adult life."

The study also found that the loss of strength and fitness was accelerating.
Between 1998 and 2008 strength fell by 0.6% each year, but this more than doubled to 1.6% per year between 2008 and 2014.
Falls in muscular endurance were larger at 2.5% per year in the period from 1998 to 2008, rising to a 4% decline each year after 2008.
Researchers found levels of obesity among the children in Chelmsford had barely changed over 16 years, at 6%, while 80% of them had a normal BMI.
However, one in three of the normal weight children was found to be unfit, while 70% of those who were classified as obese because of their BMI were physically fit.
Dr Sandercock said the term "healthy weight" was misleading and said that using BMI in isolation was not an effective way to monitor health.
He added that more fitness testing in schools would give a more accurate picture of children's health.
The research has been published in the Journal of Science and Medicine in Sport.

Don't forget to opt-in to Our Healthy Living Society and get 3 free gifts while receiving the latest information on health, well-being and groundbreaking news about natural nutrition.
Posted by Ankh Rah Healthy Living Blog at 14:51