A Gravity-Defying Fitness Class That's So Fun, You Almost Forget You're Exercising!

What It Is: Spiderbands
Who Tried It: Grace Gavilanes, PEOPLE.com associate editor
Level of Difficulty: 8/10
I first heard of Spiderbands when one of my Tough Mudder teammates told me he was becoming an instructor. The name sounded like a theme park ride for thrill-seekers, but I was intrigued. Although I’m admittedly not the biggest fan of heights, Spiderbands — which offers a full-body workout using resistance bands dangling from the studio’s ceiling — sounded too badass to not try out. So I made the trek to Brooklyn for a chance to channel my inner spider.
Conceived by personal trainer Franci Cohen, Spiderbands is one of the signature classes offered at Fuel Fitness — which also boasts rock climbing, trapeze and Jiu Jitsu. Cohen describes her specialty fitness center as an unofficial not-for-profit, with 100% of profits going to charities like the Make-A-Wish Foundation. (Bonus feel-good points for working out while supporting worthwhile causes!) 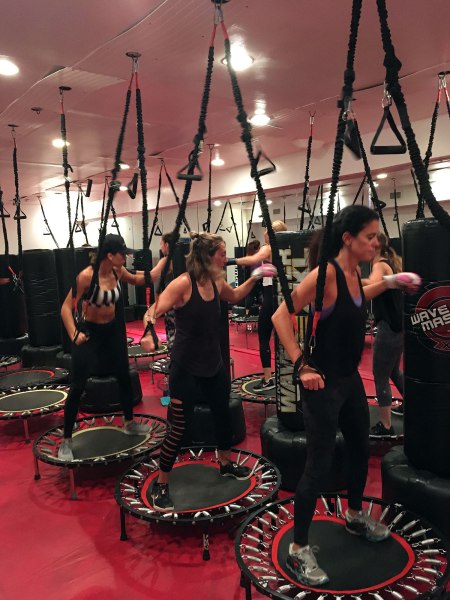 As for how she’d describe Spiderbands? “It’s like rubbing your head and stomach at the same time,” Franci told me a few minutes before the $34 class started.
As I walked to my designated space, which featured a small trampoline, black punching bag and resistance bands that hung from the ceiling, I met co-class member Shannon, a Spiderbands devotee — “I come five times a week because I love it” — who answered all my questions and helped strap me in and out of the bands.
And boy, did I need the help. For the first few minutes of warm up, our 8:00 a.m. class broke into a jog on our respective trampolines, adding punches, kicks and lunges to the mix. Spiderbands is no joke. It’s fast-paced, which tripped me up a bit at first before I finally found my groove.

Unlike many other fitness classes, Spiderbands relies on choreographed movements as opposed to mindless reps — something I initially found intimidating but ended up appreciating halfway through. It was an intense workout, but I was too busy thinking about the next moves to worry about when the class would be over.
We lifted ourselves up with the help of the shorter resistance bands at one point. We also gave our bags “bear hugs” with our legs while pulling ourselves up with the bands — my favorite part, without question. 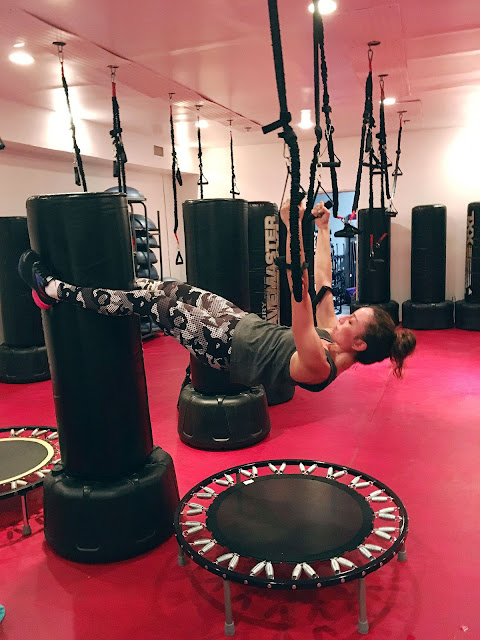 Yes, there were jabs and kicks that reminded me of my kickboxing classes, but Spiderbands felt different. It was actually fun and didn’t feel like work, which I admit is a rare thing to say for a body-sculpting workout.
Toward the end of class, Franci had us pull down the longer bands, and asked us to strap our feet in. It was a routine request for regular Spiderbands attendees but confused me. Shannon sensed my uneasiness and quickly gave me pointers.
“Just pull down and slide your feet halfway,” she said, already secured.
“Okay,” I responded with hesitation. “I’m not going to flip over, right?”
“No, you won’t,” Shannon assured me.
When we were all strapped in, we reached for our trampolines, kicking our legs up in the air. My arms and abs were burning throughout the circuit, and I felt like a superhero.
Verdict: I’ve taken different fitness classes in the past, but I can confidently say that Spiderbands is one of a kind. It’s a low-impact but a totally effective workout that had me drenched at the end of class and left me with sore legs, arms and abs for the next two days. Real talk: I’m already stalking the Spiderbands website to book my first class at their next location in New York’s Union Square.
http://people.com/bodies/spiderbands-class-we-tried-it/