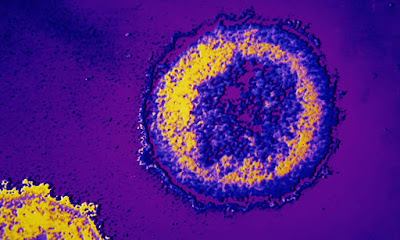 A child who was infected with HIV at birth and given a short course of treatment has remained healthy for the last nine years without further drugs, according to scientists at a conference in Paris, in a case that could give hope to children born with the virus.
Researchers say they hope to learn from the case of the child, born in South Africa, to save others from having to take powerful daily medication as they are growing up and for the rest of their lives.
The case resembles that of the “Mississippi baby”, a child in the US who were infected at birth in 2010 and treated until she was 18 months old. The mother disappeared with her child. When they returned and the baby was tested after a year without drugs, she had undetectable levels of HIV virus and doctors thought she may have been cured. However, in July 2014, they announced the virus had re-emerged.
Scientists’ hopes were dashed and they are not suggesting the South African baby is cured. There is no HIV infection, but advanced testing techniques have been able to detect a reservoir of virus integrated inside a tiny proportion of immune cells. The child’s immune system, however, is healthy and there is no sign of HIV infection and no symptoms.
“Further study is needed to learn how to induce long-term HIV remission in infected babies,” said Anthony S Fauci, director of the National Institute of Allergy and Infectious Diseases (NIAID), which funded the study of babies born with HIV of which the child was part nine years ago.
“However, this new case strengthens our hope that by treating HIV-infected children for a brief period beginning in infancy, we may be able to spare them the burden of lifelong therapy and the health consequences of long-term immune activation typically associated with HIV disease.”

Avy Violari, from the Perinatal HIV Research Unit of the University of the Witwatersrand in Johannesburg, who presented the case study to the International Aids Society conference, said: “To our knowledge, this is the first reported case of sustained control of HIV in a child enrolled in a randomised trial of ART [antiretroviral therapy] interruption following treatment early in infancy.”The trial in 2007 enrolled infants infected with HIV at birth, who were randomly assigned either to just 40 weeks of antiretroviral drugs or else to 96 weeks. The child was one of 143 babies that received the shorter course. When the drug treatment ended, the virus was undetectable in the baby’s blood – and has since remained so.
This is the third case of a child with HIV who has remained healthy for some time without treatment. Two years ago, researchers reported on a French child who was born with HIV in 1996 and was given treatment at the age of three months. The treatment was stopped sometime between the age of five and seven. The child was still healthy and without measurable HIV virus more than 11 years later.
The South African child does not have the genetic profile of the rare individuals who have not become infected with HIV in spite of being exposed to the virus, who include some sex workers. But researchers believe there may be something else besides the early drug treatment that contributed.
“By further studying the child, we may expand our understanding of how the immune system controls HIV replication,” said Caroline Tiemessen from the National Institute of Communicable Diseases (NICD) in Johannesburg.
There is still much to learn about the effects of starting and then stopping drug treatment in children with HIV. Other children have not remained free of the virus.
https://www.theguardian.com/society/2017/jul/24/case-of-healthy-hiv-baby-could-help-others-say-scientists

Don't forget to optin to Our Healthy Living Society, for the latest information on health, wellbeing and groundbreaking news about natural nutrition.
Posted by Ankh Rah Healthy Living Blog at 13:00