Why Does Hunger Vanish When You Ignore It Long Enough? 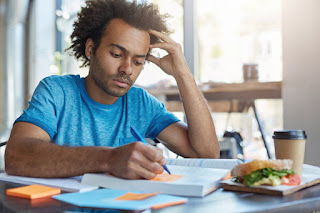 Why is it that when you're tremendously hungry, you're able to forget about it if you're in the middle of an intriguing activity, such as reading a good book?
It's almost as if you're able to ignore those hunger pangs until your task is complete, at which point the hunger can hit you hard.
Such a question might seem straightforward, but the answer is actually quite complex and perplexing, dietitians told Live Science.
When a person is hungry, a cascade of triggers notifies the brain that the body needs food. One of those triggers is a hormone called ghrelin — "the only mammalian substance that has been shown to increase appetite and food intake when delivered to humans," according to a 2006 review in the journal Physiology and Behavior.
Most of the body's supply of ghrelin is created in the stomach and duodenum (the first part of the small intestine). Once made, ghrelin can cross the blood-brain barrier and target certain parts of the brain, stimulating hunger, according to the review.
Moreover, ghrelin is with us 24/7: its levels drop as we eat, and rise before meals, reaching concentrations high enough to stimulate hunger, according to the review.
However, a curious finding shows that ghrelin isn't the be-all and end-all of hunger pangs.
In a 2016 study in the journal Clinical Nutrition, 59 obese adults participated in an eight-week-long program in which they fasted every other day. (They ate sparingly on the "fast" days, and ate freely on alternate days.) But after measuring the participant's ghrelin levels, the researchers found that "hunger was not related to ghrelin concentrations … at any point," they wrote in the study.
In other words, when people fasted, their levels of ghrelin increased. But for unknown reasons, these people didn't report feeling hungrier than usual.
"It's interesting because the subjective "How hungry are you?" doesn't really match up with what we measure clinically," Colleen Tewksbury, a bariatric program manager at Penn Medicine, who was not involved with the review of the study, told Live Science.
So, why is it that people can basically ignore their hunger pangs? One idea, based on anecdotal observations, is that intense activities can distract people from their hunger, said Leah Groppo, a clinical dietician at Stanford Health Care in Palo Alto, California.
"If you're really distracted, often times people are able to lose that sense of hunger," Groppo told Live Science. "Then, over time it [the feelings of hunger] will diminish because you're still hyper-focused on something else."
However, if you're surrounded by enough cues to remind you of your hunger — say, you're reading a novel but you're by the kitchen, and the smell of dinner is wafting through the air — then you'll likely remember how hungry you are.
https://www.livescience.com/59897-why-hunger-subsides-when-ignored.html

Click Here For More Articles
Don't forget to opt-in to Our Healthy Living Society, for the latest information on health, well-being and groundbreaking news about natural nutrition.
Posted by Ankh Rah Healthy Living Blog at 11:00