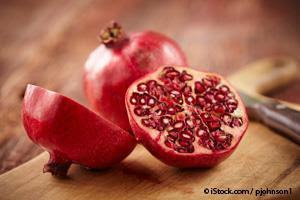 If you cut a pomegranate in half, you'll find it's filled with juice-filled seed sacs called arils (about 600 of them in an average pomegranate). If you're willing to put in the work to get them out, you'll be rewarded with a wonderful tart flavor and health benefits to boot.
In the US, however, pomegranate, the "seeded apple," is often passed by in the produce section because of the perception that it's too complex to get to the "jewels," or arils.
As a result, pomegranate juice has skyrocketed in popularity while the whole fruit sits in the shadows (at least in the U.S.; worldwide it's one of the most popular fruits). Many of the research studies have looked into pomegranate juice, but I strongly suggest consuming the fruit in its whole form instead.
You'll get the antioxidants that pomegranates are known for without the excess fructose that can come from fruit juice (plus, pomegranate arils have beneficial fiber that's not found in the juice).

Pomegranates Are Technically a Berry

The pomegranate has a thick leathery skin and a striking bright red color, giving it a somewhat exotic appearance. It's actually classified as a berry, which is filled with edible seeds.
Pomegranates are one of the oldest known fruits, originating in Persia, and have traditionally been associated with health, fertility, and longevity.
They've been found in Egyptian tombs, eaten by Babylonian soldiers prior to battle, and incorporated into Persian wedding ceremonies to symbolize a joyous future. The arils are quite impressive, nutritionally speaking. In one cup, you'll find:1

Pomegranates have a number of nutritive properties in addition to those listed above, including providing a good source of B vitamins, copper, manganese, fiber, and phosphorus. However, what this fruit is really known for is its impressive antioxidant content.
According to a study published in the Journal of Agricultural and Food Chemistry, which compared the potency of 10 different polyphenol-rich beverages, pomegranate juice scored top billing as the healthiest of them all.2
Its potency was found to be at least 20 percent greater than any of the other beverages tested, beating out Concord grape juice, acai, and blueberry juice—three well-known sources of potent antioxidants. It beat them primarily because it contained the most of every type of antioxidant.
Pomegranates contain three types of antioxidant polyphenols, including tannins, anthocyanins, and ellagic acid, in significant amounts. Ellagitannin compounds like punicalagins and punicalins account for about half of pomegranates' antioxidant ability, and many of their health benefits.
Pomegranates have been studied for their potential role in 105 different diseases and have at least 39 associated pharmacological actions.3

According to the authors of a study published in the Proceedings of the National Academy of Sciences, mice that drank pomegranate juice reduced the progression of atherosclerosis by at least 30 percent.4 The finding held true in humans as well.
When patients with atherosclerosis drank pomegranate juice for one year, the artery-clogging plaque in their carotid arteries was reduced by up to 30 percent while blockages in the control group had a 9 percent increase.5
It's thought that antioxidants in pomegranates benefit your heart in a number of ways, including:6

Pomegranate contains estrogens (estradiol, estrone, and estriol) and has estrogenic activities in mice. It's thought the fruit may positively affect your brain's estrogen and serotonin receptors, possibly leading to a boost in mood.
In a study of mice that had their ovaries removed, those that received pomegranate extract showed an improvement in symptoms of depression.7

Pomegranate's antioxidant activity is known to inhibit cell proliferation, and invasion, and to promote apoptosis (cell death) in various cancer cells.8 In one study, pomegranate extract was found to inhibit the growth of human breast cancer cells by inducing cell death.9
In men with prostate cancer, those who drank pomegranate juice significantly lengthened the time it took for their PSA levels to double (from about 15 months to 54 months).10
Men whose PSA levels double in a short time are at an increased risk of death from prostate cancer, so the results suggest that pomegranate had a protective effect. According to the University of Maryland Medical Center:11

"In test tubes, pomegranate extracts made from juice, rind, and oil slow down the reproduction of cancer cells and may hasten their death. Some extracts also help reduce blood supply to tumors, starving them and making them smaller."

Pomegranate's antioxidant and anti-inflammatory effects reduce oxidative stress and have a positive effect on bone health.
An animal study published in the European Journal of Nutrition revealed that all parts of the pomegranate up-regulated osteoblast (cells responsible for bone formation) activity, and decreased the expression of osteoclast (the cells that break down your bone) markers.12
The researchers concluded, "all PG [pomegranate] parts are effective in preventing the development of bone loss." Further, in a systematic review of eight studies, all of them revealed "positive effects of pomegranate extract or juice on osteoporosis, osteoarthritis, and rheumatoid arthritis."13
Pomegranate extract was found to be potentially useful for treating bone loss associated with these conditions.

Part of what makes pomegranates so healthy is their potent anti-inflammatory effects. Pomegranates show significant anti-inflammatory activity in your gut, for instance, which may be useful for fighting inflammatory conditions in your gastrointestinal tract. 14
Polyphenol-rich pomegranate extract has also been shown to alleviate tissue inflammation and high cholesterol in mice with diet-induced obesity.15 It's also been shown to inhibit inflammation in your brain, leading researchers to suggest it may be a nutritional strategy to help slow the progression of neurodegenerative disorders such as Alzheimer's disease.16

Pomegranates or pomegranate extract may help reduce joint pain and decrease inflammation in arthritis sufferers, according to research published in the Israeli Medical Association Journal.17 The antioxidants in pomegranates may also help to reduce inflammation that contributes to the destruction of cartilage in your joints, a key reason for the pain and stiffness felt by many osteoarthritis sufferers.
One study even found that pomegranate extract blocked the production of a cartilage-destroying enzyme.18Researchers concluded:19

"PFE  [pomegranate fruit extract] or compounds derived from it may inhibit cartilage degradation in OA [osteoarthritis] and may also be a useful nutritive supplement for maintaining joint integrity and function."

Leading erectile dysfunction drugs treat erectile problems by increasing nitric oxide (NO) production, relaxing your blood vessels, which increases penile blood flow.20 Pomegranate juice has been shown to protect NO and enhance its effects on certain biologic systems, which suggests it may be useful for helping erectile dysfunction, at least theoretically.
A small study that tested this theory in 2007 found promising, although not statistically significant, results among men with erectile dysfunction who drank pomegranate juice.21 However, the researchers believed there was reason to keep testing to see if a benefit does, indeed, exist:

The flavonoids in pomegranates are thought to have a memory-enhancing effect. In a study of mice, animals given low or moderate doses of pomegranate juice had improvements in memory, particularly short-term memory.22 A pilot study also found that people who used pomegranate supplementation following heart surgery were protected against memory dysfunction (a common complaint following such surgery).
Further, while the placebo group had significant deficits in memory following surgery, the pomegranate group actually had improved memory function for up to six weeks after surgery.23 Research also suggests dietary supplementation with pomegranates may slow the progression of cognitive and behavioural impairments in Alzheimer's disease.24

How to Eat a Pomegranate in 3 Simple Steps

The next time you're food shopping, go ahead and pick up a pomegranate or two. You'll find they're not nearly as hard to eat as you might think. The POM Council recommends this simple three-step process:26
Pomegranates make a great whole-food snack all on their own, but you can also add them to smoothies, homemade kefir and yogurt, or on top of salads and vegetable dishes.