Signs, Symptoms, Causes and Ways to Prevent Heavy Metal Toxicity No One Talks About

by Elisha of My Health Maven
Exposure to heavy metals is on the rise. We are all repeatedly exposed to toxins on a daily basis, whether it is through the food we eat, the air we breathe or the products we use. Modern living and convenience carries a steep price.
Toxicity is such a problem that babies are now BORN with toxins, due to the toxic load of their mothers. A 2004 study by the Environmental Working Group (EWG) found that blood samples from newborns contained an average of 287 toxins, including mercury, fire retardants, pesticides and chemicals in non-stick cookware. 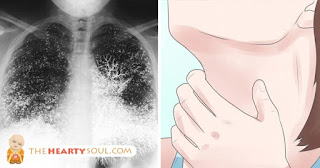 Causes of Chronic Heavy Metal Exposures
Heavy metal toxicity can result from either acute or chronic exposure to heavy metals. Chronic exposure commonly comes from mercury based amalgam fillings, chemical residues in foods, mercury in vaccines and flu shots, toxins in personal care products, household products, industrial exposures, air and water pollution to name a few. Some professions carry a higher risk for heavy metal exposure such as anyone in the dental profession (including dental office staff), hairdressers, artists, and lab workers.
Individuals who have chronic conditions, or weakened immune systems can be more susceptible in developing heavy metal toxicity, as they are not able to excrete these toxins as efficiently as someone with a stronger disposition.  Many times, symptoms of metal toxicity are misdiagnosed as chronic illnesses such as multiple sclerosis, chronic fatigue, autism or depression.
Causes of Acute Heavy Metal Exposures
• Receiving vaccinations or flu shots that contain thimerosal (mercury preservative)
• Mishandled metals at a job site
• Chemical and heavy metal spills–even from a broken mercury thermometer
• Chronic exposure happens over a period of time, and includes:
• Having mercury amalgams (“silver fillings”) in teeth
• Living in a home built prior to 1978 that has lead-based paint
• Smoking and/or inhaling second-hand smoke
• Eating foods (such as contaminated fish) that contain high levels of heavy metals
• Living near a landfill
• Working in an environment where exposure is prevalent, such as at a dentist’s office where amalgam is commonly used
Symptoms of Heavy Metal Toxicity
It is important to note that symptoms can vary according to the metal that has accumulated in the body. Not every symptom for every metal is listed, simply the most common.
The most commonly associated metals with poisoning are mercury, lead, arsenic and cadmium. There are two types of heavy metal toxicity: acute and chronic. Acute symptoms are usually quick and severe, so they are easier to diagnose.
Acute symptoms can include:
Chronic symptoms can be harder to diagnose as they develop over time and have different symptoms such as brain fog, insomnia or impaired motor skills which are easily misdiagnosed.
Chronic symptoms can include:
If you are having these symptoms, and you feel that heavy metal toxicity is a possibility, you may wish to discuss metal toxicity with your practitioner before receiving treatment.
Guidelines for Reducing Your Toxic Metal Exposure
• Avoid and remove amalgam fillings (using a biological dentist who understands the correct procedure for removal)
• Avoid costume jewelry
• Avoid smoking and second hand smoke
• Avoid conventional cleaning products
• Avoid cosmetics with aluminum bases, antiperspirants with aluminum
• Avoid aluminum and nonstick cookware
• Avoid seafood
Improve Your Diet
Maximize your health by eating whole, organic foods. Eating a healthy diet is key to nourishing and rebuilding your body.
Eat whole, organic unprocessed foods.
Eat local in season foods whenever possible.
Include cultured and fermented foods in your diet.
Include healthy fats in your diet.
Eat one third of your food raw.
Consume Foods That Help the Body Flush out Heavy Metals
The best foods for removing heavy metals from your body are wheatgrass, chlorella, spirulina, cilantro and garlic.
According to Dietrich Klinghardt, M.D., Ph.D., cilantro is probably the only agent effective at removing toxic mercury from intracellular spaces and the nuclei of cells.
Foods rich in sulfur, are also important to help reduce a toxic metal load, such as grass fed meats, egg yolks, garlic, onions, and cruciferous vegetables.
Turmeric which helps maintain the health of the liver and kidneys is also effective at expelling toxins from the body.
Alpha -lipoic acid is a potent antioxidant that is essential for healthy metabolism. It also binds to heavy metals in the body and helps clear mercury and lead from the body. Alpha lipoic acid can be found in foods such as Brewer’s yeast, beets, broccoli, carrots, potatoes, spinach, red meat, organ meats, and yams.
Foods rich in amino acids-Amino acids are natural chelators, they can be found in foods such as corn, carrots, grapes, oatmeal, papayas, plums and pomegranates
Heavy Metal Testing
If you suspect that you have heavy metal poisoning, there are blood, hair, fecal and urine tests available through your practitioner. These tests can be used to determine toxicity as well as to test your level of progress if you choose to pursue chelation therapy.
Chelation Therapy
You should understand that eliminating heavy metals is a challenging process and dependent upon the level of toxicity it can take several months or longer to eliminate them safely.  Detoxification is a process that should never be rushed. It is important that you have healthy liver and adrenal function, and excellent elimination before undertaking any chelation treatment. Always seek the care and guidance of a healthcare professional who is familiar with heavy metal detoxification.
Sources include:
http://www.ewg.org/news/videos/10-americans
http://www.greenmedinfo.com/disease/mercury-poisoning
http://www.greenmedinfo.com/blog/garlic-beats-drug-detoxifying-lead-safely-body-1
http://www.greenmedinfo.com/blog/research-confirms-sweating-detoxifies-dangerous-metals-petrochemicals
http://www.mercola.com/article/mercury/detox_protocol.htm
http://hippocratesinst.org/benefits-of-wheatgrass-2
http://www.herbwisdom.com/herb-chlorella.html
http://umm.edu/health/medical/altmed/supplement/spirulina
http://www.webmd.com/a-to-z-guides/heavy-metal-poisoning
http://www.dentalwellness4u.com/layperson/symptoms.html
http://www.ncbi.nlm.nih.gov/pmc/articles/PMC3654245/