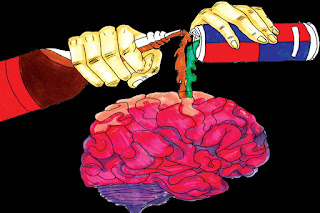 At some point we've all been at that stage of the night when we're fading, and an energy drink is needed just so we can make it through the last few hours.
However, the idea of substituting an alcoholic drink for a Red Bull or a cheaper alternative is not something we really adhere to, so combining the two is the obvious solution.
Now, we've all been told that it's bad for us, sending our hearts into some kind of break dancing routine as they pump away in our chests like a crackhead's does every night of the week - but how bad is it?

It turns out, it's just as bad as taking cocaine, according to new research.
The study claims that the effects of energy drinks and vodka on our brains will last for years in a similar way that nose diving into a pile of Charlie will.
Professor Richard van Rijn tested this on teenage and adult mice and found that the adolescent ones displayed physical and neurochemical signs, much like the ones given cocaine.
Researchers found that the effects of energy drinks mixed with alcohol last well into adulthood, which apparently changes their ability to deal with substances such as drink and drugs.
They also found that if, for some reason, you develop a Bolivian marching powder addiction later into your adult years, then you'll need more to give you a high if you've smashed the vodka Red Bulls as a teenager.
Looking at this there will probably be three types of people: Those who are thinking 'energy drinks and alcohol is like cocaine? Get in!', those who are genuinely scared by this and have been put off it for life, and, finally, those who don't give any amount of fucks.