Restaurants, Public Transport and BED – The No-Go Areas for Vaping! 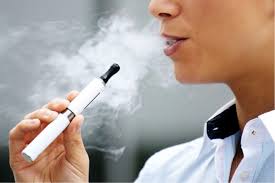 Social etiquette experts Debrett’s have issued their latest guide – to polite VAPING.
Around 2.2 million UK adults use an electronic cigarette but there are clouds of confusion over the social rules with more than a third (35%) of vapers admitting they don’t really know where they can and can’t vape.
While eight in ten vapers claim to be considerate of others, a third of non-vapers say there is a lack of ‘vaping decency.
As a result, e-cig brand Vype has partnered with etiquette experts DeBrett’s to help ease the confusion and add a little decorum to vaping.
In a restaurant, a queue and in bed are among the no-go areas for vaping, according to an accompanying poll of 2,000 adults by Vype.
Blowing vapour in someone’s face is also a no-no along with during a job interview and in a confined space such as a lift.
And the Debrett’s Guide to Vaping Etiquette advises that the main rule of thumb is “not to assume it’s acceptable – and always check first”.
When vaping at work, “exercise moderation – you wouldn’t want your boss to think you’re more interested in your e-cigarette than your email”.
And they discourage the creeping trend of ‘stealth vaping’ – where users conceal their device and craftily grab a puff.
They caution “it is of course possible to vape discreetly, with minimal exhalation of vapour. But nobody wants to be ‘outed’ in a non-vaping zone, and stealth vaping was considered to be a faux pas by our survey respondents.
“It’s best to wait until you’re somewhere where it’s acceptable to vape so that you can do so openly.”
And the guide also offers advice to non-vapers who might feel moved to confront a vaper about his or her habit.
“Decisions about where or where not to vape, and where to allow vaping, are largely discretionary, and civilised vaping is dependent on good manners, from vapers and non-vapers alike. »
Katherine Lewis from Debrett’s said: “Vaping is a relatively modern phenomenon and, as such, etiquette is still being established.
“It’s not difficult to be a respectful vaper though – you just need to be courteous and ask permission before engaging in behaviour that may affect others.”
Vype spokeswoman Elly Criticou [corr] said: “Seventy-nine per cent of those we surveyed said vaping is more common now than it was two years ago.
“But it was also obvious that vapers and non-vapers are struggling to navigate social niceties.
“As vaping grows we want to do our bit to help vapers be considerate of others and non-vapers be more accepting. Good etiquette will go a long way to address this.”
Top 10 vaping no-no’s1. In a confined space2. In a restaurant3. During a job interview4. Blowing vapour in someone’s face5. In a car without permission6. In a queue7. In your home without permission8. On public transport9. When someone is cooking10. In bed 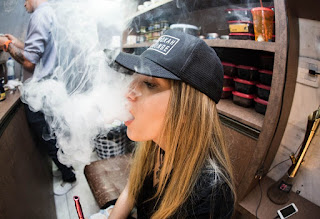